Most homeowner’s insurance policies will have coverage for damage to roofs in what are called open perils. These are unexpected events that cause damage to your roof such as hail, wind, hurricanes or fire.

Does home insurance cover roof leaks? This is a question that is asked by many homeowners because they usually do not understand the entire scope of their policies. When homeowners have damage to their roofs that causes leaks, they might wonder whether the leak will be covered by their homeowner’s insurance policy. Most insurance policies will pay for damage to roofs, depending on what caused it. When a homeowner wants to make a claim, a public adjuster in Miami may inspect the roof damage and determine its cause and extent. When dealing with insurance  claims, a public adjuster can represent the homeowner throughout the whole process.

Every case of property damage is unique. A roof that has been damaged  because of a hurricane that came striking at 100mph and lifted the tile or shingles off or a falling object should all be covered. Due to there being many factors, consulting with a Florida public adjuster can help answer all the questions you may have.

When people notice that their roofs are leaking, they might want to review their homeowner’s insurance policies to see what is covered and what is excluded. Some causes of damage to roofs may be explicitly excluded in the insurance policies. For example, if the loss is determined by the public adjuster to have been caused by the homeowner’s failure to maintain the roof, the homeowner may have to pay for the repairs out of pocket because any damage that comes negligence by the policyholder will not be covered.

It may be difficult for someone to identify a roof leak if they have no experience at all with home repairs. The specific leak that is present could be determined by a public adjuster, along with knowing if the leak is covered by the homeowner’s insurance or not.

Finding roof leaks early is vital to prevent damage to people’s property. Identifying the source of the leaks can be difficult. Water may trickle down the slope of the roof and enter in a different area. People should start by inspecting their roofs and looking for any obvious entry points such as loosened or broken shingles. If they can’t find where the water is entering, they can examine their attics to look for damp areas. If people do not find any cracks or entry points for water leaks, they might have plumbing leaks instead of leaking roofs. 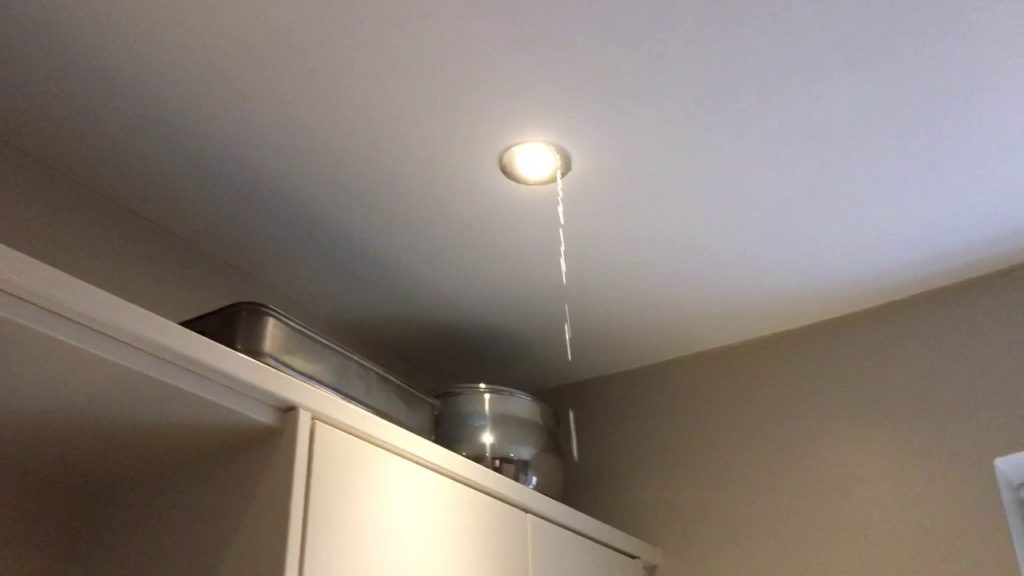 Roof leaks can happen because of multiple different reasons, but here in south Florida and Orlando the most common cause of loss to a roof is Hurricane damage or Hail damage. When Hurricane Irma swept through Miami leaving a trail of destruction up through Naples and Port St Lucie it caused damage to thousands of roofs. If you live in South Florida or even up in Orlando and Tampa there is a good chance you need a hurricane Public Adjuster for your roof leak.

Rook leaks are a common damage that homeowners experience and one that is often not covered because an owner was negligent in not maintaining their home, known as gradual damage. If the damage happened overtime and could have been prevented with immediate repairs, then a policyholder would most likely not be covered for the damages damages. These are some facts and statistics on roof damage:

Due to the number of tornadoes and hurricanes that Florida is faced with every year, hail is very possible and has been seen in Florida in recent times. Hail is the number one cause for roof damages and has known to be to cause billions of damages in roof repair throughout various states.

Question: How Could I tell whether I have a viable roof claim or not?

Answer: In most cases, signs of damage to a roof are often hidden to the eye, making it difficult to spot that any damage actually exists, leading the damage to develop even more over time. While it may be hard to spot, these are some signs that a homeowner could watch out for that may indicate that there is a presence of roof damage: loose shingles, spots that are dark on the roof, granules that have been knocked off, stains on walls, water spots on walls, water around windows, and more. An insurance companies’ adjuster will try to immediate deny a roof claim without even doing the investigation that it deserves, making the usage of a public adjuster essential.

Question: Would I be Required to tarp my roof if a storm blew off some shingles and water seeping in is of a great possibility?

Answer: Because it is a problem that was noticed immediately before the water even came into the home, yes, the owner would have to tarp their roof to prevent further damage because that is what the insurance company would want them to do. If the owner fails to prevent further damage when they could have, it could jeopardize any claim for roof damage. If damage could be prevented, the owner must take action. It would be essential to learn of owner’s responsibilities when dealing with damages to their home.

Question: Will roof damage be covered for a roof that was in bad shape initially yet it was left neglected from water damage and roof damage?

Answer: A viable roof claim would most likely not occur, but a claim for water damage may exist. Most insurance policies exclude wear and tear and damages resulting from maintenance. This refers to items that have reached their intended time of use or that were not maintained as they should have been cannot be recovered. If an owner does not meet their responsibilities by keeping their homes up-to-date, their lack of maintenance will not be recovered.

How A Public Adjuster Florida Can Help

Depending upon the extent of the damage, a roof that is leaking can cost a few hundred to several thousands of dollars to fix. If the entire roof needs to be re-shingled, people may expect the repair to cost an estimated $5,000. When people are getting ready to make a significant claim with their insurance companies for roof damage, getting help from a public adjuster is crucial. Many claim adjusters will not even inspect the roofs as they should and will just deny the claim.

Fill Out The Form For A Free Claim Inspection